The riscvOVPsim ISS is an ideal starting point for an embedded software development project.

riscvOVPsim allows the development and debug of code for the target RISC-V processor on an x86 host PC with the minimum of setup and effort. It simply requires the cross compilation of your application and running riscvOVPsim with an argument to specify the name of the application object. 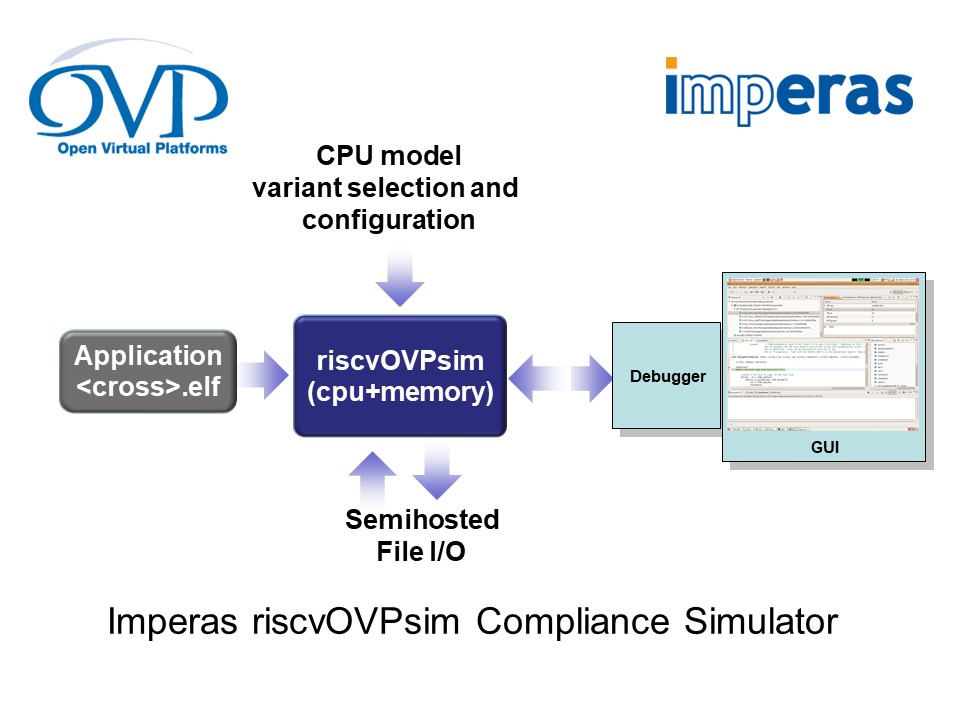 Used by application software engineers who need to create software binaries for RISC-V permitted configurations and variants, but who do not need platform components - riscvOVPsim works with a standard GDB debugger and GUI which makes it very easy to get started with full source code interactive debugging.

Middleware library developers can also use riscvOVPsim when building software libraries for common functions, for example multimedia standards where they code at the assembly level and make extensive use of the processor data path - the debugger/GUI shows detailed assembly and all processor registers.

Test engineers can use riscvOVPsim in a regression test environment as it can be used in batch/scripted environments as well as being used interactively.

riscvOVPsim is also used by the RISC-V Foundation's Compliance working group in the RISC-V compliance test suite and framework, the latest version is available on GitHub: https://github.com/riscv/riscv-compliance

Imperas produces a range of products that can be layered on the riscvOVPsim simulator:

Extendable Platform Kits (EPKs) are platforms built by Imperas that can be used out-of-the-box for software development. They include the CPU and main peripherals to enable full Operating Systems (OS) and RTOS to run. EPKs range from simple ones like the Atmel AT91SAM7 using an ARM7DTMI core and UART that boots ucLinux all the way to the ARMv8 Cortex-A57MPx4 Versatile Express that boots Linaro Linux. Many of the platforms include the Imperas virtualized UART, Ethernet, and USB models which not only run in simulation, but also connect to the real world allowing, for example a simulated browser to access the real internet, or the simulator to communicate with a real USB memory stick plugged into the host PC. For RISC-V there are EPKs and models of components from Microsemi, Andes, SiFive and others including the SiFive FU540 multicore platform that boots SMP Linux in under 10 seconds. To see this and others in action view the videos here. http://www.imperas.com/imperas-videos

QuantumLeap MPonMP (MultiProcessor target on MultiProcessor host) acceleration software which adds to the already industry leading performance of the ISS.  QuantumLeap accelerates simulation by taking advantage of the multiple x86/x64 cores on the host PC, which is especially advantageous for multi-core processors such as the ARM Cortex-A53MPx4, MIPS proAptiv or the SiFive RISC-V U540. QuantumLeap simulates in parallel what other tools can only do serially and in doing so is typically 6-15x faster than other commercial simulators. Used with the ISS, QuantumLeap provides parallel simulation of the single instance of the CPU cluster.

riscvOVPsim is free, and available now for download on GitHub https://github.com/riscv-ovpsim or with additional debug and trace features at https://www.ovpworld.org/riscv-ovpsim. It includes a free to use license from Imperas, which supports commercial as well as academic use. The RISC-V open source model is licensed under the Apache 2.0 license.

Additional resources on riscvOVPsim and RISC-V solutions from Imperas

See the introduction to riscvOVPsim in this video

The Hardware Vanishing Point: Someday, Will it All be Software? - Electronic Engineering Journal - Kevin Morris