QuantumLeap is a parallel simulation performance accelerator that leverages a new synchronization algorithm to provide the fastest virtual platform software execution speed available. The execution performance of this new technology has been measured on average at 15 times faster than the nearest commercial solution using standard benchmarks.

QuantumLeap eliminates this barrier by allocating the simulated cores across all the processors in a host machine. By ensuring the efficient synchronization of these cores, near linear scaling of the simulation across the multiple host processors has been observed, with the impact of inter-core communication kept to a minimum. Furthermore, QuantumLeap provides a transparent use model, with no change required to the software-under-test, the virtual platform models or the development environment, while ensuring fully deterministic simulation execution.

The execution performance of this new technology has been measured on average at 15 times faster than the nearest commercial solution using standard benchmarks.  Simulation performance of great than 16 Billion Instructions-Per-Second has been observed for a virtual platform using an OVP model of a multi-core ARM Cortex-A9 running on a standard 3.4 GHz quad core host PC.

Imperas’ simulation technology is based on a Just-In-Time (JIT) Code Morphing engine that streams simulation execution to maximize performance, providing the fastest software processor models available today. The company’s ToolMorphing™ algorithm further extends this capability by neutralizing the performance impact of the running of software verification tools within simulation.

The QuantumLeap accelerator extends this approach to include parallel engine execution, spreading a virtual platform simulation across multiple host PC processors. QuantumLeap’s proprietary synchronization algorithm minimizes the impact of communication between the parallel cores, allowing them to scale across available host PC processors as much as possible.

QuantumLeap operates on platforms that incorporate both Asymmetric Multi-Processing (AMP) and Symmetric Multi-Processing (SMP) schemes. It has been designed to effectively handle the inter-core communication overhead challenges associated with the most complex SMP processor architectures including, for example, devices based on the state-of-the-art ARM Cortex-A57 and Imagination MIPS Warrior P5600 multi-core processors. 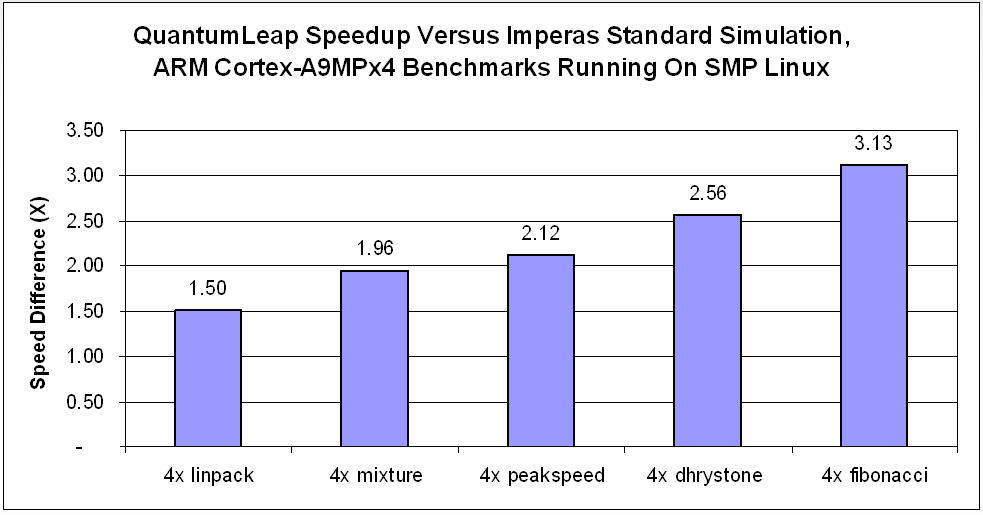 The High But Often Unnecessary Cost Of Coherence